The MBA: Remaining Relevant in 2011

It's nothing new that top graduate business schools across the country stretch themselves to keep up with the times, remain relevant, and enhance the quality of a student's two-year stint in school. Over the past two decades, they have responded to financial crises, evolving corporate needs, questions of ethics, and a global economy. They've even responded to the cries of students who want lavish facilities and daily comfort on campus to justify steep tuition costs.

Once there was a time when a student could leave b-school and sidestep courses related to Asia or Europe business, emerging markets, regulation, ethics and technology. Students today can't avoid these topics and typically don't want to.

Insider-trading scandals from the 1980s and 1990s and accounting and financial fraud at Enron and other companies spurred schools to address ethics in business.  The Internet explosion of the 1990s and 2000s encouraged schools to examine technology and online business models. The financial crisis of 2008-09 has encouraged schools to cover topics in regulation, derivatives, financial reform and "asset bubbles." Emerging economies from India to China and Brazil meant schools needed to become international in scope, experience and research.


Business schools today are more accommodating to students with multiple interests or more more specialized interests.  For a long time, top schools have encouraged or permitted students to pursue joint MBA and JD degrees. Others today pursue joint degrees in business and any one of the following: public policy, public administration, international studies, and communications.

Similarly, they have encouraged (and required) students to focus or concentrate on a specific area of interest:  real estate, energy, industrial management, operations, entrepreneurship, non-profit sector or finance.  Students don't just take core courses and a broad array of general business topics in pursuit of a "generalist" MBA degree. They can pursue in more depth what they are interested in or what they think is relevant and important.

If students are interested in the MBA and green technology, the MBA and developing economies, or the MBA and the music industry, b-schools today at least try to find a way to accommodate them.

In its annual assessment of MBA education, the Economist reports  (http://www.economist.com/node/21532269) that some schools are exploring all kinds of ideas of MBA concentration, not just the familiar sectors of  marketing and finance. Some schools are responding to business trends or corporate needs. Others are responding to students' interests and a sluggish economy. Many are willing to be creative, as long as they can maintain high quality and attract exceptional students.

The Economist suggests how it makes sense for a school like Washington University with respected schools of business and medicine to offer a special program in, say, "medical-sector management," comprising students and faculty from both schools and with specific disciplines in health-care management and related issues.

Long-time Consortium supporter Joe Fox tells the magazine that ideas such as that are welcome, but are not easy to implement.  Fox, the director of Washington-Olin's MBA program and a Consortium board member for many years, agrees a joint medical-business-school program is attractive and relevant. He contends, however, that while such joint efforts make sense on paper or in concept, they are difficult approve and implement, because they involve cooperation from many--faculty, deans and others. (Washington University's Olin is one of the original Consortium schools.)

Students, too, must decide whether the special programs (including joint degrees or special concentrations) will require more time and, as a result, more expenses.  Will the special program or the joint degree mean three or four years in school (instead of two)? Will there be a sufficient return on this investment, especially in current uncertain times, even if the student has the passion, time and energy to pursue a special program?

Most students, of course, will ask (and are asking) whether there will be meaningful opportunities after they have completed a course of study--any course of study, whether it's a traditional MBA, joint degrees or a MBA with a unique concentration. Will there be opportunities to do what they want to do within the realm of their interests and studies?

MBA corporate recruiters typically don't require joint degrees or special concentrations. But candidates who have pursued unique degree programs can stand out from the large pool of students. They show expertise in a specific area, perhaps ingenuity and a way to contribute right away in an entry-level job. The finance MBA graduate with specialty in, say, "medical-sector management" would be attractive to the health-care finance unit of an investment bank or consulting firm, if not to those who manage hospitals and medical centers.

Business schools keep adapting, as if that's the way it will always be. And the way it should be.

Tracy Williams
Posted by Unknown at 1:43 PM No comments: 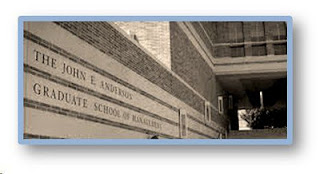 UCLA's Anderson business school is exploring going it alone. No, it won't completely separate itself from the rest of the university. It wouldn't be an outright secession. It won't relinquish the UCLA name. It has decided there might be greater benefits in becoming a self-funding, stand-alone institution at UCLA. In the process, it is studying how it can rely less on the "parent" university or the state for financial support. In turn, it will request the right to determine tuition and fees, set academic standards, and hire and pay what they wish for top faculty talent.

Anderson, a Consortium school, has decided that if it can control its finances, preside over all fund-raising and decide what value to put in the cost of an MBA degree, it will attract even greater numbers of high-quality students and improve the MBA experience at UCLA.  There is intrinsic value in being affiliated with the greater UCLA, and it is willing to pay a "tax" for that. It would also pay for other services the parent provides (administration, infrastructure, etc.). But it figures that Anderson would be an even better business school, offering exceptional experiences and resources, if it decides to go it alone.

For prospective students and for alumni who experienced and benefited from Anderson, is this the proper course of action? Will there be notches of improvement in the school, but with substantial increases in tuition? Will alumni, supporters and other benefactors be more willing to become large donors?

Moreover, is there a risk in making itself inaccessible to some portions of the population interested in attending a top business school?

This isn't the first time a business school untangled itself from the rest of the university. Virginia's Darden, also a high-quality, public business school, has done something slightly similar. UCLA-Anderson is studying Darden's blueprint and claims to be somewhat self-sufficient already. It says it doesn't rely on state funding as much as many would think.

What will going alone mean for future students and applicants? While this move may permit it to hire the best professors it can find or launch unique, innovative programs of study, will Anderson price out bright prospects (including those from under-represented groups) who won't be able to rationalize "private school" tuition?

The move is still under review. No doubt it is contemplating these questions and studying all implications and more:

1.  Will other first-rate public business schools follow the same? Will it set tuition and fees based on cost and value of a UCLA MBA, or will they (as many schools do) set it by matching rates at other well-known top private schools? Will a San Diego resident be required to pay the same to attend UCLA for an MBA as that at Cornell's Johnson school or Dartmouth's Tuck school?

2.  Being somewhat detached and having authority to set its own agenda (including curriculum, expansion, and forays into online learning), will there be tension with the rest of the university?

3.  Will there be inconsistencies with the rest of the university in how it manages itself? Many business schools, including Anderson, exist with appropriate levels of autonomy already, although all business schools must answer, in some way, to a university president and board of trustees. Will conflicts of interest arise because one graduate school within the university operates in a vastly different manner from others?

3.  Will there be impediments or barriers for students interested in joint programs or degrees (MBA and JD, or MBA and MPA/MPH)? Will business-school students still be able to cross-enroll smoothly in other courses in other parts of the university (international relations, law, communications, engineering, e.g.)?

4.  What happens at the business school, if the school's vision becomes too ambitious (too expensive) such that there funding shortfalls? Must the "parent" university promise to step in to ensure the school is always healthy enough to remain self-sufficient? Or will the parent permit it to sustain and prove itself financially viable (and even fail)--alone?

5.  After UCLA, who would be next? Would other top public business schools hop on board and attempt to do the same? UC-Berkeley (Haas), Indiana (Kelley), Wisconsin-Madison, Texas-McCombs, all Consortium schools?

5.  Does this in any way jeopardize its relationship with the Consortium and other diversity pipeline programs? UCLA-Anderson is one of the newest schools in the Consortium, having joined within the past three years (along with Cornell and Yale).

The last item, in fact, might be the easiest to address. Most, if not all, top-tier business schools are proving a commitment to diversity and ensuring their school rolls include people of all colors, backgrounds and countries. A more independent Anderson will likely strive just as hard to be a better and more desirable Anderson. It knows to be better and more desirable, it must also be attractive and accessible to women and those from under-represented groups.

Posted by Unknown at 4:19 PM No comments: